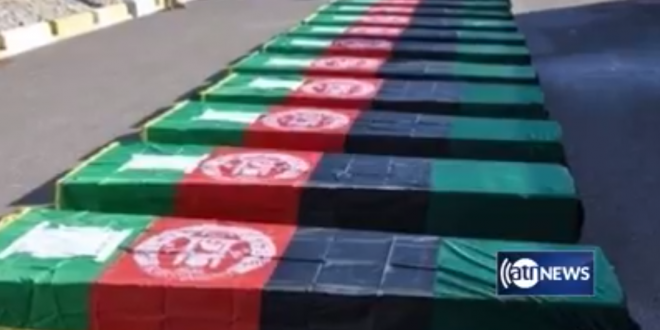 This is the second incident in less than two weeks in which the mass killing of army soldiers in Northern and Eastern provinces are witnessed. Two weeks ago, 25 soldiers of Special Force commandos killed in an ambush in Buddhis Province while 37 others killed in-mass in Takhar Province. The suspicious point in such frequent incidents is the fact that the victims belong to one or two particular ethnic groups and even from a single district; Why? How all members of a military unit belong to one or two ethnic groups? Why they are left to the pity of the merciless enemy like Taliban? Why Taliban massacre them? Doesn’t it imply an unannounced collaboration between the Pashtun dominated Kabul state with the Pashtun led Taliban?

A previous officer, S. A. Sayaar, of the ANA (Afghanistan National Army), says: “genocide is actual. It is ongoing daily, just as all of the 37 victims of last week incident in Takhar are ethnic Tajiks or Uzbiks. Similarly, it is 5 months that 200 soldiers are besieged by the Taliban in Bala Murghab area of Badghis Province and the army headquarters have left them alone and even the wounded soldier die because nobody evacuates them from the war zone. The fallen soldiers are buried in the base campus. This is because the besieged soldiers are natives of three provinces of Takhar, Panjshir and Badakhshan.”

From the beginning of the so called National Unity Government brokered by US Foreign Secretary- John Karry, the head of the government- Ashraf Ghani has been accused of ethnic biased policies. Vice President, General Dostum clearly accused his running mate for ethnic and even local discrimination.

The generous amnesty for the Pashtun Taliban criminal prisoners by the government on one hand and its interferent stance towards non-Pashtun soldiers in the war zones, as supports this opinion that the two recent mass killing of non-Pashtun soldiers are genocide and emanates from an intentional pre-designed decision rooted in ethno-fascistic policies of the so called NUG.