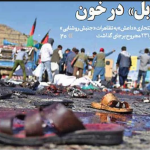 Dozens were killed and wounded in a suicide bombing by the so-called Islamic State or ISIS in Kabul. Afghan Ministry of Public Health Affairs has announced that more than 64 people were killed and at least 265 others were injured in the attack. The attack took place at the same time as protests were underway by a group called ... END_OF_DOCUMENT_TOKEN_TO_BE_REPLACED